Hans-Peter Kleebinder is an independent expert for #SMARTMobility, #SMARTCities and #MaaS with 24 years of management experience in sales, marketing and communication at BMW, MINI and Audi. His studies in business administration, psychology and politics took him to Munich, St. Gallen and London. His first professional position was as a freelancer at Burda Verlag in Munich & New York in 1992. In 1993 he joined DIGMAR AG in Switzerland as a junior consultant, the first management consultancy for digital marketing in the DACH (Germany, Austria, Switzerland) region.

His doctoral thesis on “Mobility and Public Opinion Formation in Europe” has accompanied him ever since and is now more topical and relevant than ever. In 1995 and ’96 he was responsible for the global market launch of the BMW 3 Series. From 1997 he was able to do digital pioneering work with the launch of the first web platforms for BMW, MINI and Rolls Royce and the establishment of the BMW Group Zukunftswerkstatt (eMarketing//CleanEnergy//ConnectedDrive).

Then followed his personal and professional dream task: 9 years and 9 months he accompanied the market launch of the MINI brand in Germany. With his team he achieved the profitability of the MINI business segment in Germany, first as Head of Marketing, then as Head of Sales and finally as Head of MINI Germany. From 2010, he supported Audi’s conquest of market leadership in the German premium market as CMO Germany. His professional career in the automotive industry was rounded off by the development of the Social Media business area for Audi from 2013 in various strategic and operational roles, including Audi Customer Care and Taskforce Dieselgate, both across divisions and countries.

Today he passes on his experience and knowledge from the automotive industry as a keynote speaker with an individual focus on myMobility & myBrand & mySocal Media. His motivation is to support and accompany people & brands & teams on their way to a successful digital future. Asia and especially China and India will continue to play an important role as a source of inspiration in the future.

With his family of 5 he lives in the countryside east of Munich and on the mountain in Ramsau in the Zillertal. He enjoys Tyrol, Italy and India with his family – whenever possible – and likes to photograph people.

What is his competence?

Mobility is one of our basic needs next to breathing, eating, making love and a roof over our head. Opinion formation and behavior are strongly influenced by national interest & peculiarities and the economy.

The compatibility of individual and collective mobility, economic prosperity through mobility of people, goods and data is the driver for our quality of life and our personal autonomy.

Our networked world is becoming ever more mobile – and mobility ever more networked. With new, integrated mobility services that no longer focus on your own vehicle.

In a world that is becoming more complex and faster, brands serve as orientation and identification anchors.

Transparency, honesty and a clear identity and attitude are becoming hygiene factors.

Brands belong to fans and customers and must earn loyalty and trust.

Crises and mistakes are opportunities to create customer enthusiasm if they are explained honestly, consistently and at eye level with those affected and if possible solved.

What are his topics? 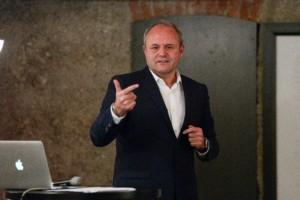 Mankind and Mobility: Everything digital & autonomous? The future of our mobility: green, connected and secure. #myMobility

How to successfully build up and successfully destroy automotive brands. His personal experience report. #myBrand

How you can exacerbate crises or mistakes with & without professional social media management or profit from crises & mistakes. Field report Diesel-Gate. #mySocialMedia

This site uses cookies. By continuing to browse the site, you are agreeing to our use of cookies.