This blog is a summary of the study “Staying on the winning track”, commissioned by the Austrian Federal Ministry of Transport, Innovation and Technology (BMVIT) and the Federation of Austrian Industries (IV) [1]. The study was conducted by Council4 GmbH in cooperation with Dr. Hans-Peter Kleebinder.

The automotive industry is undisputedly one of the leading sectors of the Austrian economy. With alternative drive technologies, digitalisation and the changing mobility behaviour, the industry is facing numerous challenges. Companies should set the course in good times to master the transformation process. Political institutions at all levels are called upon to create appropriate conditions in order to benefit from the opportunities that arise in this change.

Until now, there has been a lack of knowledge about the expected changes for such decisions. A basis for this is provided by the present study “Staying on the winning track” with resilient scenarios for the market share of drivetrain technologies until 2030 and an assessment of the economic implications for the Austrian automotive industry.

Global developments determine the pace of transformation: emission regulations and the associated penalties require decarbonisation and thus the electrification of vehicle fleets. China as the new dominating automobile nation and alternative mobility concepts are also driving electric vehicles. Internal combustion engines (diesel/petrol and gas) will be replaced by electric drives (battery and fuel cell) in the long term.

The future prospects of electromobility must be viewed holistically. All transport modes and distance ranges must be examined and characterised in terms of their requirements for electromobility. [2] In the future, both technologies will coexist side by side. Battery-powered electric vehicles are highly efficient for short distances and low loads. On the other hand, fuel cells are strong enough for long distances and high loads. Figure 1 shows the ideal fields of application for both technologies. [3] 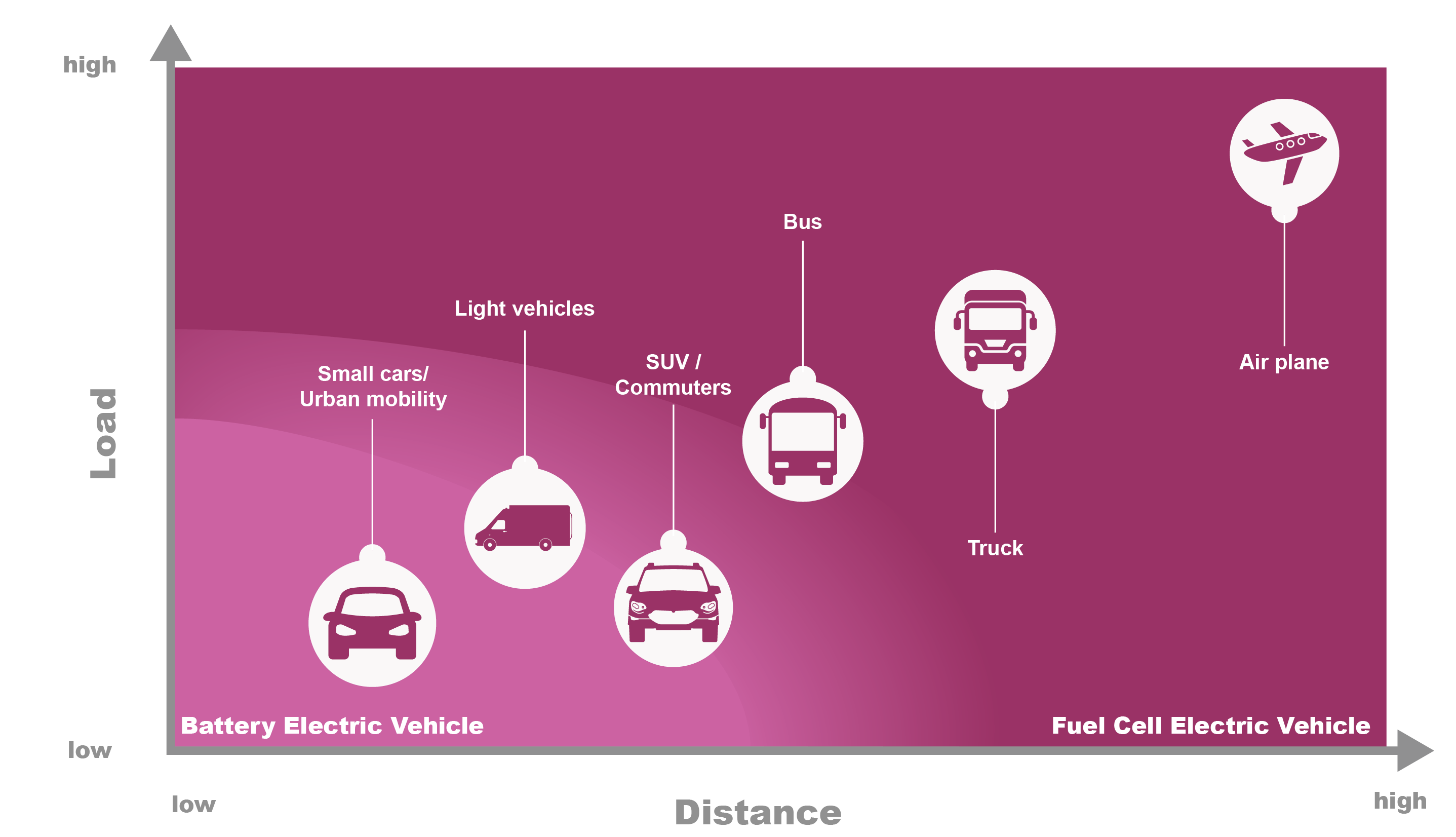 Reference vehicles were defined for each drive technology and it was determined which vehicle components were needed, whether they were produced domestically or imported and their cost structure was analysed. This shows, on the one hand, that there will be a significant reduction in complexity in vehicles in the future, as a result of which many components will no longer be needed, and on the other hand that some of the newly required components will not be produced in Austria and will therefore inevitably have to be imported (e.g. battery cells).

All calculations are based on the so-called base scenario, which assumes that there will be no change in market shares compared to 2018. Only the expected change in demand until 2030 is adjusted. The mix of drive technologies, therefore, remains as in 2018: 94.3% combustion engine (petrol/diesel), 3.1% combustion engine (gas), 0.82% hybrid systems (PHEV) and 1.71% electric motor (battery). Vehicles powered by fuel cells and hydrogen were not applicable in 2018.

How the automotive industry will develop in the coming years depends on a number of influencing factors. In this study, four major drivers were identified and analysed.

However, the automotive market in Austria with a world market share of only 0.43%, is not large enough to be able to determine future automotive trends on its own.

Based on the drive technologies, four scenarios – from slow to very fast electrification – were developed and calculated. In the scenario with the fastest change (Scenario 4), only 15 percent of cars worldwide will be newly registered with gasoline, diesel or gas in 2030, the remaining market shares being distributed among electrified systems. The authors of the study consider the “moderate electrification” scenario (Scenario 2) to be the most presumable: According to this scenario, 72 percent of newly registered cars in 2030 will still be powered by combustion engines; divided into diesel/petrol with 37 percent, hybrids with 28 percent and gas with 7 percent market share. Battery-powered vehicles will achieve a share of 26 percent and fuel cell vehicles 2 percent, see Figure 2.

Figure 2: Representation of the base scenario 2018 and the scenarios for the market shares of drivetrain technologies in 2030

If the automotive industry in Austria does not adapt in the future or adapts too late, there is a risk of losses in value-added. The faster the change towards electric cars takes place, the greater the loss for employment and value-added in Austria. Even in the most realistic (moderate) scenario, a decline of 1.7 percent would be expected in the Austrian automotive industry in 2030, in the most ambitious scenario (Scenario 4) even 5.8 percent, which corresponds to two billion euros. Not only the automotive industry is affected, but also other sectors such as petrol stations, garages, trade or the entire linked industry. If no action is taken, also jobs are in danger: around 6,000 jobs by 2030 in the moderate scenario, up to 24,000 jobs if the change takes place quickly (Scenario 4). In addition, every job in the automotive industry currently secures another job throughout Austria.

The results show that battery-powered electromobility is finding its way into the Austrian automotive industry. Extreme electrification can lead to severe losses in employment and value-added and possibly also threaten the existence of small and medium-sized enterprises. Figure 3 compares the powertrain components of internal combustion engines and electric motors. The number of components required is significantly reduced for electric drives. A conventional combustion engine can consist of about 1200 to 2000 individual parts, whereas an electric motor can only consist of 100 to 200 parts. Moreover, the battery, which accounts for about 50% of the production costs of pure electric vehicles, is not produced in Europe and causes the Western value-added to flow to Asia. 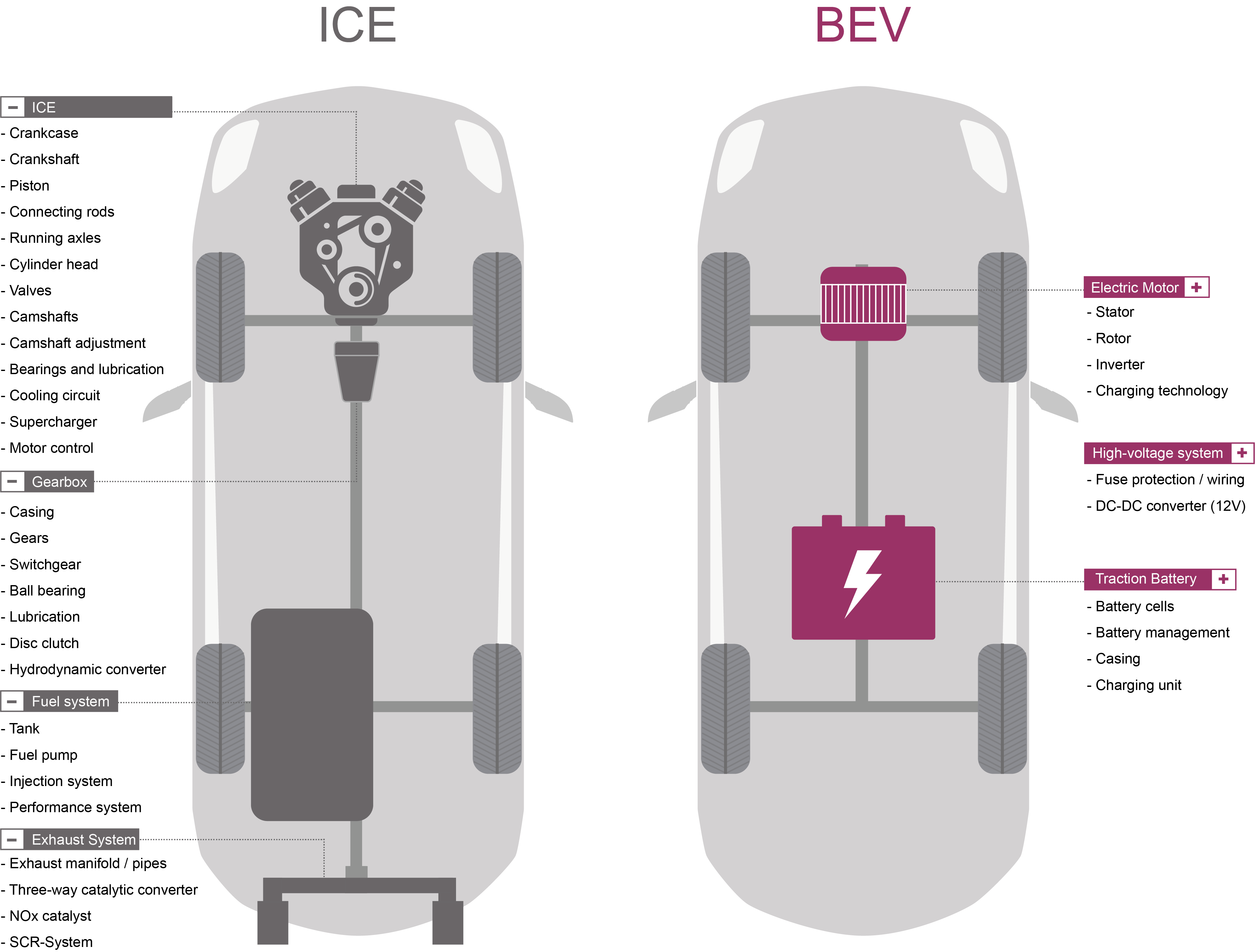 In order to be able to determine the pace and intensity of this change, it is necessary to create appropriate framework conditions. The task is not only to limit the negative effects on Austria’s automotive industry but rather to participate in this new growth market.

However, the change brings opportunities especially for newcomers, the authors emphasise: “The entry barriers are much lower for e-drive systems, there will not only be Tesla and other new car manufacturers but also completely new mobility providers, business models and suppliers”, says Kleebinder.

To sum up: Austria is not (yet) prepared for the opportunities and risks of rapid drivetrain technological change. What is needed is a cross-sectoral “Mobility Transformation Master Plan“, which can only succeed hand in hand with the energy system transformation towards renewable sources and accompanied by scientifically sound and independent expertise. Further recommendations for action by the authors relate to securing the industry location by achieving critical production mass, cluster formation and creating incentive systems for investments and innovation, based on technological openness. New competencies have to be built up, existing specialists have to be retrained and the population, as well as the industry, have to be educated. Austria has the opportunity to profit from the upcoming mobility revolution and to emerge strengthened as a location for future drivetrain technologies.

Link to the study (in German): Auf der Siegerstraße bleiben

This site uses cookies. By continuing to browse the site, you are agreeing to our use of cookies.